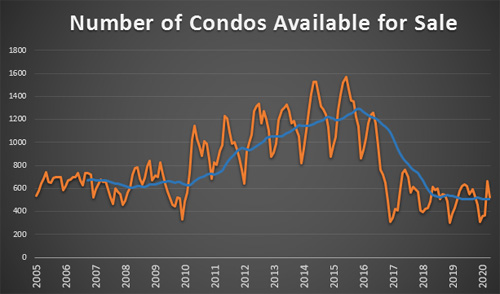 Over the last 5 years, the average number of condos on the market for sale in April has been 866. This past April, we had only 522 available. Inventory is lower than the 5 year average but is in line with what we've seen since 2017. 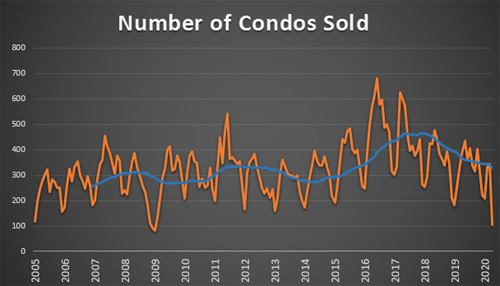 Over the last 5 years, the average number of condos on the market that sold in April has been 484. This past April, we had 106 sales, demand was the lowest we've seen since December 2009. 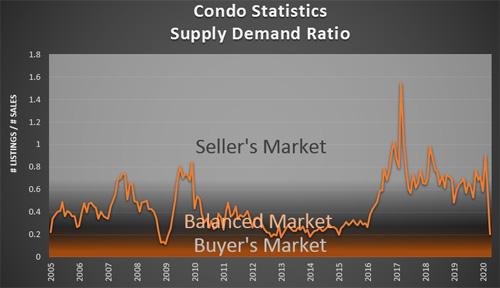 The supply vs demand chart has drastically shifted from a Seller's Market into Buyer's Market territory. This is the most significant spike we've seen in the chart. The Buyer's have disappeared. 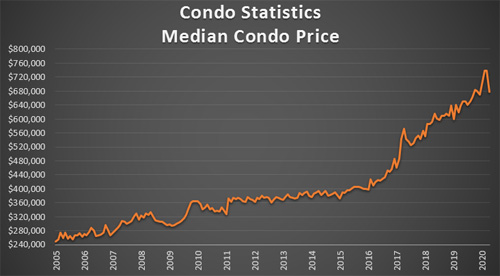 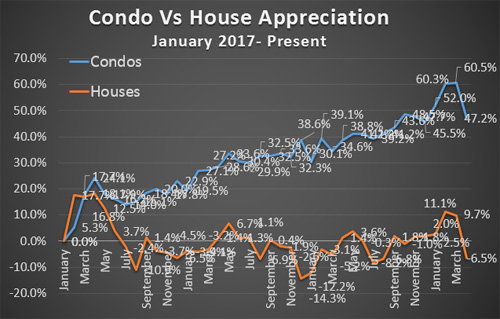 It's too early to speculate at what point prices are going to level out as we just don't know how this virus will play out. The fall market will tell will us the real story. The Canadian banks dropped interest rates and introduced a 6 month payment deferral which eliminated the need for most panic selling. Most seller's aren't under real pressure unless they have purchased another property and need to sell their home to be able to close on their new home. Any price predictions are pure speculation. With higher unemployment, lost confidence and the unpredictable Covid...  the housing market will face challenges in the next 12 to 18 months.

Most Buyer's have put their hold on search and most agents don't want to work at this time. This has reduced demand by about 75%. To keep things in perspective though, condo prices have only lost about the last 6 months of growth. Since condo prices have been rising so quickly, prices were so high that we'll likely see more corrections in the coming months. I don't feel that the current supply/demand ratio has been fully reflected in price changes yet.

Covid is also greatly impacting the AirBnb market, which is spilling over into the long term rental market and lowering condo rental prices as well. Some investors may decide to sell their rentals adding to the pool of inventory and putting pressure on sale prices. So we think 2020 will be a bit of a roller coaster. In one hand, condo prices had become so unaffordable for an entire generation of first time Buyers that this may bring some hope for entry level first time Buyers. People's behaviour towards the virus is varying so greatly from complete isolation on one end to recklessness on the other. We also sense some complacency starting to creep in already in what might be a much longer battle than some are planning for.